DAP contains a near 1 : 1 ratio of nitrogen to phosphorus, present in readily available ammonium and phosphate forms. Ammonium nitrogen is less susceptible to ammonium gas losses when compared to urea nitrogen. Ammonium nitrogen can be taken up directly by plants, more often it is bound to clay particles in the soil where it will over time be transformed to nitric nitrogen. 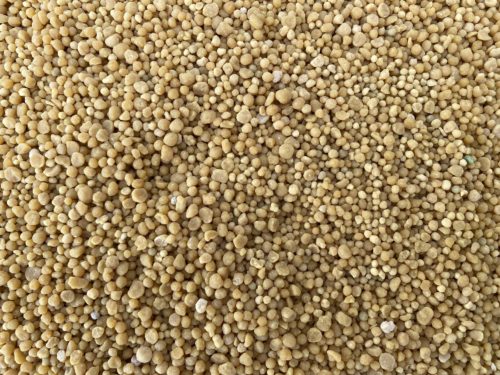 DAP is a versatile and cost effective form of nitrogen and phosphate. When there are requirements for both nitrogen and fast acting phosphate DAP should always be considered. DAP blends well with most other fertilisers making it a good base to build a complex fertiliser blend from.

The benefits of using DAP:

When applying larger phosphate applications, water soluble phosphate such as that contained in DAP can lose efficiency in some soil types that have a limited ability to hold onto phosphate. In these situations we recommend blending DAP with a non-water soluble form of phosphate such as DDPhos Granulated RPR. For more information speak to your Dickie Direct Area Manager.